Simple and easy to use. Great cloning and backing up drives A few weeks ago Weme reached out and asked if I could do a showcase of their Dual-Bay External Hard Drive Docking Station model MST-006. Their timing couldn’t have been better, I was in need of cloning an old defective SSD to get my mom’s computer back up and running, more on that later.

I took them up on it and they shipped me one to showcase. 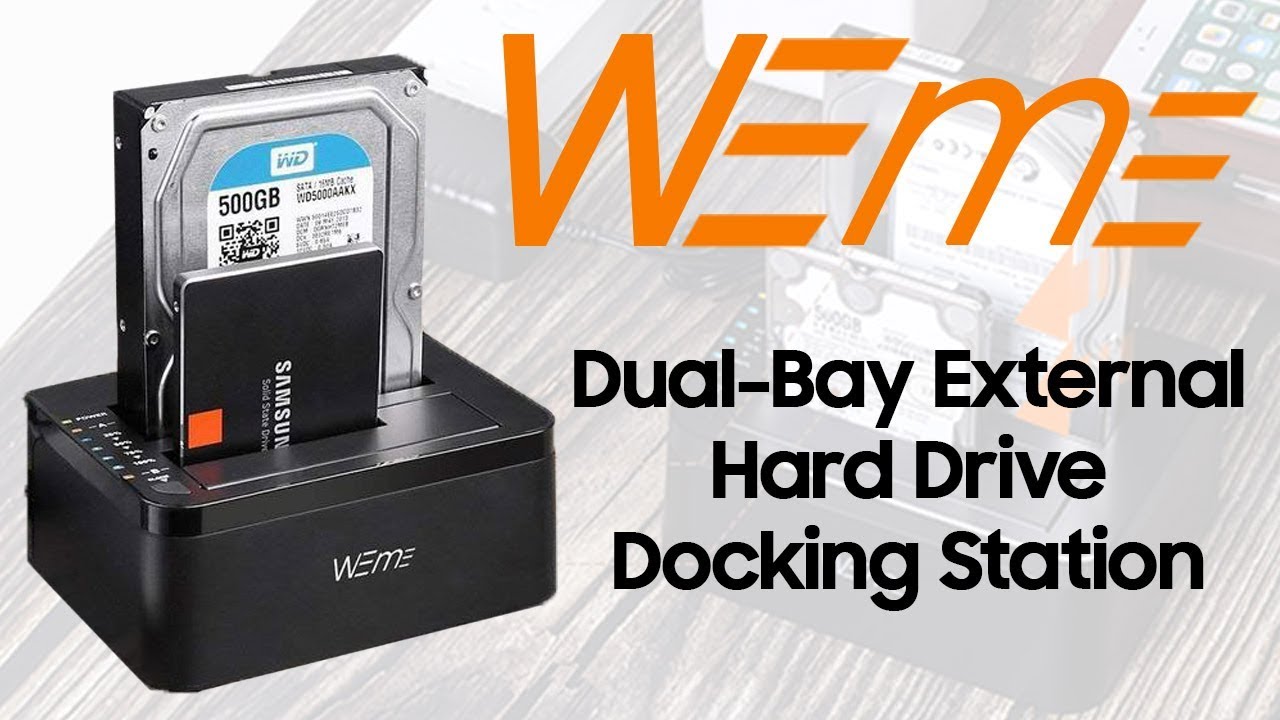 What you get in the package

First off the packaging includes the docking station, a dust cover for the dock, something simple that is sorely missing from other hard drive docking stations, all though you may have to cut a flap out so you don’t have to disconnect the dock to cover it. There’s a 12V 3amp wall adapter and a beefy 3.3 foot (1 meter) USB 3.0 type A data cable, a type C is also available. The docking station has a very subtle and compact design allowing it to feel right at home pretty much anywhere. I like that there’s only a small strip of glossy plastic along the top, I’ll leave the protective layer as I still don’t want finger prints all over it. The rubber feet on the bottom makes sure the dock doesn’t move around especially while your drives are spinning. Finally the simple LED layout and one-button operation makes off-line cloning as easy as it gets.

With support for two SATA drives of the 2.5 inch or 3.5-inch variety with capacities up to 12TB you can move absolutely tones of data in one fell swoop using the built-in cloning function. The set up for off-line cloning is very simple, plug in the power to the wall, slide in your storage devices, making sure to put in the drive that is being cloned, the source, into slot A and the drive the data will be copied to, the target, in slot B. Now you can turn on the dock by pressing the power button on the back. You’ll know everything is set when the power LED lights up along with the LEDs for slots A and B.

In my case I was copying roughly 63gigs of data from an older 120gig SSD that stopped being recognized in the BIOS into a newer 240gig SSD, this took about 17 minutes for me, but obviously larger capacities will take longer to complete. One nice feature of the dock is if you do leave it alone for a while and it completes a clone it will automatically power down after 30 minutes so it doesn’t needlessly use electricity.

One more thing to remember is that it’s best to power off the dock before removing or inserting any storage devices.

Once the clone was done I was able to pop in the new drive into my mom’s computer and she was able to pick up right where she left off when the old SSD stopped working. Connected to a Computer / Mac

To use the dock as an external storage device simply hook it up with the provided USB cable to your computer or Mac, when you power it on any drives you have inserted will appear on your computer alongside your internal drives.

To best represent some real-world transfers I created a 1.5gb file package with almost 2000 files that consist of sizeable videos and a large hierarchy of smaller files like word docs, spreadsheets, pictures, etc. Doing some files transfer tests with an old Sandisk SSD slotted in place shows transfer speeds of up to 150megabytes per second or 1.2gigbits per second in both directions, dropping near the end as it hit all the smaller files.

These are pretty respectable real-world speeds for this old SSD, this is thanks to the help UASP protocols. Behind the Motherboard Tray

The right case panel is pretty much completely covered with sound absorbing the material and is almost completely rigid and has some weight of its own giving it a quality feel.

Behind the motherboard panel, there is 34mm or a little over an inch of space for cable management which is more than enough for most setups. There are several strategically placed smooth rounded cable management holes and plenty of loops to secure all the cables with the included zip ties allowing for a clean cable management setup.

There is also one 2 and a half inch cage for one SSD if you don’t want to put it anywhere else.

Unfortunately, there were a few quality control issues in the form of sharp metal barbs attached to screw holes from the drilling process in the motherboard panel. This can be dangerous if left uncorrected as it could cut into a cable sleeve over time and short it out.

In the basement we find the hard drive cage with two plastic sleds for either 3 and a half inch and or 2 and a half inch drives that are nice but I don’t see any vibration dampening gourmets or the such for HDDs which kind of takes away from the detail-oriented design that I was getting used from the rest of the case. Luckily the back portion of the basement does have some good sized and soft pads to place the up to 200mm power supply on along with a dust filter that slides out of a bottom mounted rack.

That wraps up my showcase of the WEme hard drive dock, it is a great little companion for anyone that needs to create clones or hook up large capacity hard drives without having to take apart their computer for one file and for $32 on you can’t go wrong. As a special offer to my viewers you can get an additional 10% off when buying the dock on Amazon.