After more than a year of ownership, I’m still very happy and got some fun footage Just like my original review of the ASUS AC1300 Router I like to come back around a year or so later to exam what it’s been like to actually live with something I’ve recommended so highly,  the good and the bad. It’s also a perfect time to answer a bunch of questions I’ve been asked about the DR02 since my initial video. 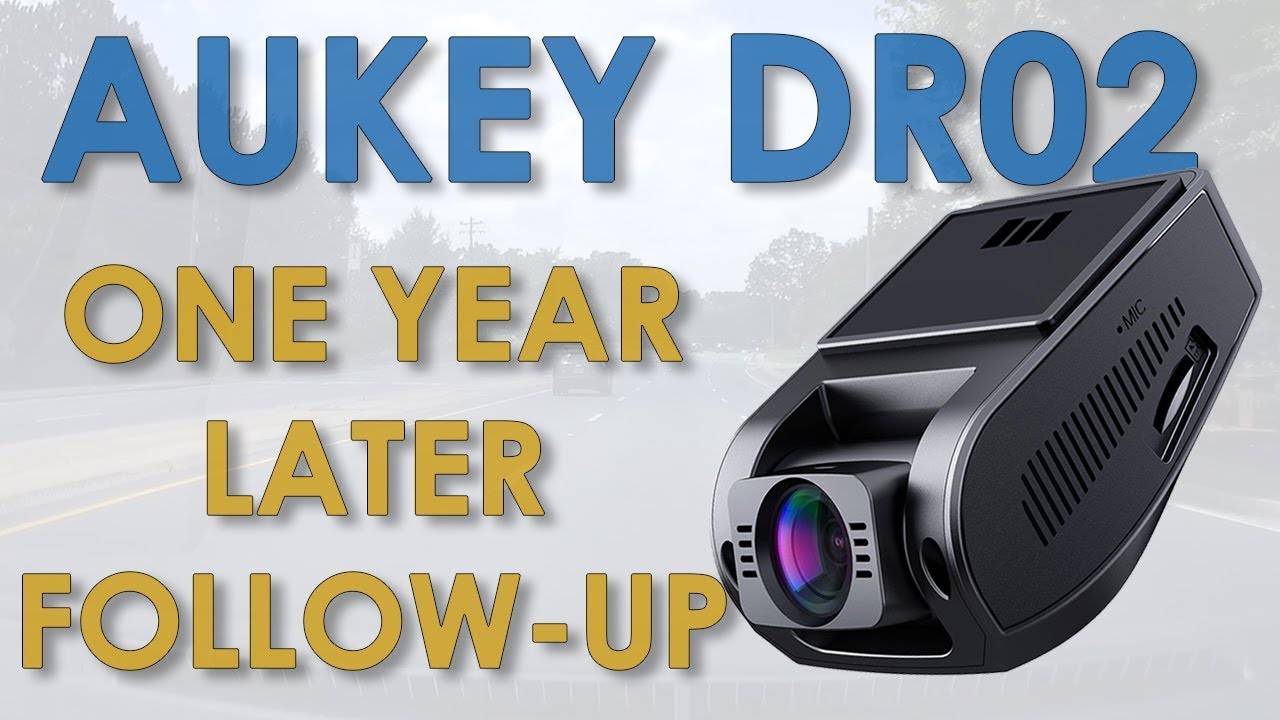 If you haven’t read the first review about this dash cam check it out and come on back when you’re done.

For a device that’s technically meant to be installed and forgotten until you need it the Aukey has performed marvelously. I installed it in such a way that it was completely out of sight so I really did forget it was there sometimes.

If I ever did need some footage I’d just pop out the SD card, upload it to my computer, and pop it back in and to follow up on one viewer’s question, the way you insert the micro SD card is like this, with the contacts facing down which may seem a little counter-intuitive when looking at it. To answer another common question, you do need to remove the micro-SD card to download the footage as plugging in the camera itself just turns it on to record. This does require an SD card reading, the one I’ve used for the last year and longer is this Transcend TS-RDF5K USB 3.0 multi-card reader. You can find it on Amazon for $8 bucks at the link below.

You could also pick up this Anker USB type-C card reader which can be hooked up directly to your phone assuming it has a type-c connection like my Samsung S9 and upload footage directly to it for storage or to share. This is a really cool little adapter that removes the needs for a computer or laptop, it’s only $13 bucks on Amazon, link to it below.

One thing I still love about the DR02 is how easy it is to mount and unmount the camera whenever I feel the need to put it out of sight, even with its subdued design you just don’t know in some places. I still contend that this is a far superior mounting system than all the suction cup designs. It simply won’t move or get jostled out of place over time due to everyday vibration or after hitting a pothole or two. Of course, the only downside being the ability to remove the whole camera system and put it in another car easily. This is partly why Aukey gives two mounting brackets in the box. I never had to move it so it didn’t affect my opinion of it, but your needs may vary.

Now even though I drive in and around the Atlanta area I’m happily surprised to report that the only crazy video I have to show from over a years’ worth of footage is of this guy, now watch this. We get behind him as he’s leaving the apartment complex, drives up the hill here, underestimates the turn, pops the curb and hits a light pole, good thing no one was trying to leave the gas station at the same time.

Even though that was the only real slightly major incident I caught, this is still Georgia so there was plenty of THIS kind of stuff to deal with on a daily basis. I mean seriously what in the frack are you doing!? Just Moooove!!!

Then you got this box truck running the light, or this dude who’s in some kind of rush.

Finally, you got me, crossing 5 lanes on the highway in one fell swoop, pro skills. Anyway, with that aside from the only real glitch, I’ve run into were some corrupted frames that popped up seemingly at random during playback. Out of the 40+ hours of video that I’ve actually reviewed there may have been 12 corrupted frames that were obvious like this one. In the grand scheme of things, it seems not to be a major issue unless of course, it’s right when you need it. To my best estimation, I’ve recorded roughly 400 hours of footage since I installed the DR02. Doing some back of the napkin math with the above ratio I came to estimate a corruption level of about 0.8% or roughly 3 full minutes of unusable footage from those 400 hours of recording.

When I first noticed these corrupted frames I decided to see if switching SD cards would make a difference. So I took out the Kingston 64gb class 10 UHS-1 grade SD card, which on its own is a good quality card, and popped in a Samsung 128gb class UHS-3 grade SD card but after 3 months I noticed the same corrupted frames occurring at pretty much the same rate. So I have to believe there must be a transcoding issue from the camera itself or some cosmic bit flipping. Again this hasn’t been a big issue but I’ll be curious to see if it gets worse. Other than that I really don’t have any complaints, the video quality is excellent during the day, at night, and everything in between. All the pieces have stood the test of time this far, something I can’t say about some other cameras so I’ll still recommend it especially if you don’t plan or need to move it from one car to another frequently.

Now time to go over some more of the most frequently asked questions from the last year. This will actually be a two-parter, I’m dedicating a whole video for the motion detection feature and what you need to make it work when the car is parked. It’s more complicated than it sounds and there’s a lot to cover, so hit that subscribe button and tap to bell to get notified when that video comes out.

How do you adjust the view?

One item I didn’t go over is how to adjust the camera’s view. The body of the camera does not actually move when mounted. Only the housing the holds the lens and sensor can actually move. It can tilt vertically down as far as 90 degrees from its original position and locks in at 15-degree intervals, so whether you drive an H1 Hummer with a straight vertical windshield or a GT60 with a crazy back slopped windshield the camera will always have a great view.

The gray tape looks terrible, what can we do?

Now about that gray double-sided tape that comes preinstalled on the mounts. As I eluded too and many of you have confirmed this gray color just stands out far too much. So soon after installing my camera I replaced the gray double-sided tape with the same 3M double-sided VHB adhesive but in black. VHB apparently stands for “Very High Bond”, who knew? I bought a 1 inch wide by 15-foot long roll on Amazon for $14. 15 feet is a lot just for this application but this stuff is useful for so many things so I’m good.

To replace the stock tape I first removed the camera from the mount, used a safety blade to carefully pull off the bracket so not to scratch up the windshield, peeled off the old tape and replaced it with about three centimeters, one and a quarter-inch length of the new black tape. That’s all you really need. I adhered it back in place and voila, much better, of course, you can also use it for the cable loops! Highly What about the Emergency Recording Mode?

Next up the Emergency Recording mode, it’s the first button in the lineup below the screen and honestly, I didn’t realize what it did until recently and it’s pretty important if you remember to hit when needed. When activated it puts the current recording and any recording that follows while it’s active into a separate folder from all the other footage. This protects it from being overwritten no matter how much more standard mode footage is recorded. Of course, if you forget that Emergency Recording mode is on you will fill up your memory card until it’s full. It will only turn off when you turn off the camera. You’ll know it’s active because this small warning icon will be at the top of the screen.

My date/time resets often, has yours?

I’ve read in a couple of comments that some other customers have had issues with dates not recording properly or settings being reverted to default after powering down. Unfortunately, I can’t speak to this issue as I have not experienced it while I’ve owned mine.

What can I do about the dashboard reflections?

Last but not least, the glare from the dashboard has been a bane since I first bought my car. After researching a few things I settled on getting a mat for the dashboard. I was still pretty skeptical about it so I tried to find the cheapest one that fits the weirdly shaped and oddly large dash of the 2013 Honda Fit.

After leaving the $50+ mats on Amazon behind, I found this one on Ebay for $15 with free shipping from China, funny enough made by a company called Xukey, maybe they are the 24th cousin of Aukey? It took 3 weeks to arrive but it was worth the wait. The initial quality was surprisingly good, clean edges (mostly), super-soft, it just felt like a decent quality item. Can’t beat it for the price.

It was really easy to install, it pretty much stays in place on its own but to be safe it comes with a handful of tabs with velcro on one the top to stick to the underside of the mat and 3M tape on the other side to adhere to the dash itself. I only used 8 or so to secure down the corners and odd sticky-outy bits. Having used it for a few months I have no complaints about its fit and finish. The really amazing part is the fix to the glaring issue. Just look at the before and after here, it is a world of difference, I don’t know why I didn’t try this earlier.

Technically there still a reflection on the wind shield but because the matt is black and fuzzy, instead of flat plastic it actually feels like the view out of the window is gamma corrected and crisper than before. 100% recommend to use a dash mat to fix this problem. Link to where to buy it on eBay will be below.

Link to the mat on Ebay HERE User manual with all of the technical details and instructions for the proper use and maintenance. Includes six languages, English, Dutch, French, Spanish, and Mandarin.

If you are still looking for an entry-level dash cam that you don’t have to worry about once it’s installed this is it. After one year in service for me I have no complaints. Get your own now!