Intro I am an avid listener of everything be it music, YouTube videos, podcasts, TV series, or anything. I’m basically always listening to something and up until recently, I’ve always used wired headphones. Since I do so much listening I have a nice pair of Sennheiser’s that are awesome like the CX 100 in-ears I’ve […] Intro Today we’re checking out the replacement for the keyboard I’ve been using since I reviewed it back in 2019. The Cooler Master Devastator 2 has been a loyal keyboard since but it’s seen better days and I wanted something more and I feel like I found that in it’s replacement the Razor BlackWidow Elite. […] 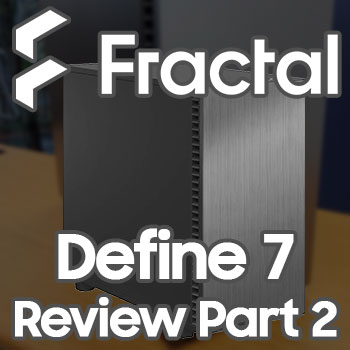 0 % Overall Rating Basically everything you’ll ever need for your next rig Full Product Name Fractal Design Define 7 Stone Gray Brushed Aluminum/Steel E-ATX Silent Modular Mid Tower Computer Case, Gray (FD-C-DEF7A-07) Intro In the first part we went over all of the features that make this case the prime choice for your next […] 0 % Overall Rating Basically everything you’ll ever need for your next rig Full Product Name Fractal Design Define 7 Stone Gray Brushed Aluminum/Steel E-ATX Silent Modular Mid Tower Computer Case, Gray (FD-C-DEF7A-07) Intro It’s become apparent that it might be a while before I can finish building my next rig but that didn’t stop […] Intro Samsung has packed the S21 Ultra with some remarkable technology. Top of which are the five cameras they have packed into this small package that not only gets you amazing selfies and wide shots but boasts AI-enhanced telemetrics that claims up to 100 times zoom. While that sounds impressive what can you actually expect […] Intro I’ve been a computer fanatic since I received my first one in the late 90’s and ever since I rarely go a day without touching one. In all that time I don’t remember there being so much excitement for the next round of new hardware. Whether it’s the battle between AMD and Intel, which […] Intro It is easy to say that Halo Combat Evolved was a defining game of my childhood. Even though it came out all the way back in November of 2001 it’s still played by hardcore fans all over the world in its original form. Now with the release of Halo CE Anniversary Edition, the original […]